Advanced facelift techniques that minimize jowls, sagging cheeks, and nasolabial folds emphasize natural-looking results by elevating soft tissue and muscle below the skin and restoring volume with fat repositioning. One of the techniques used by board-certified plastic surgeon David Stoker is called the deep plane facelift. In Los Angeles, Dr. Stoker customizes this procedure to create a more youthful and rested appearance. 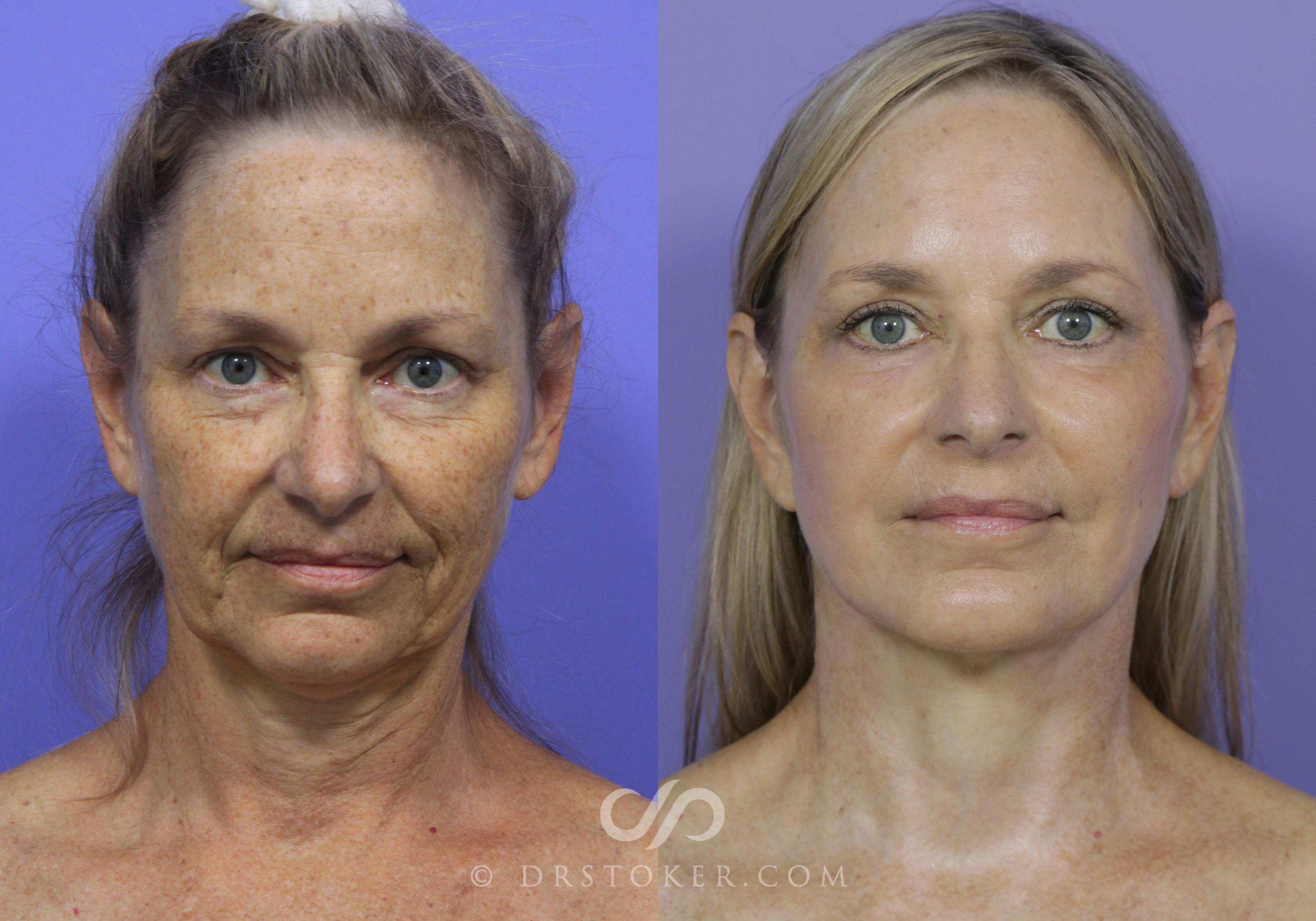 As we get older, collagen production decreases, the skin begins to lose elasticity, and sun damage becomes more noticeable. This is what we call aging, and to combat that, we can do a combination treatment. This patient wanted a full facial rejuvenation treatment to restore her youthful appearance so that is exactly what we did, giving her th... Read More 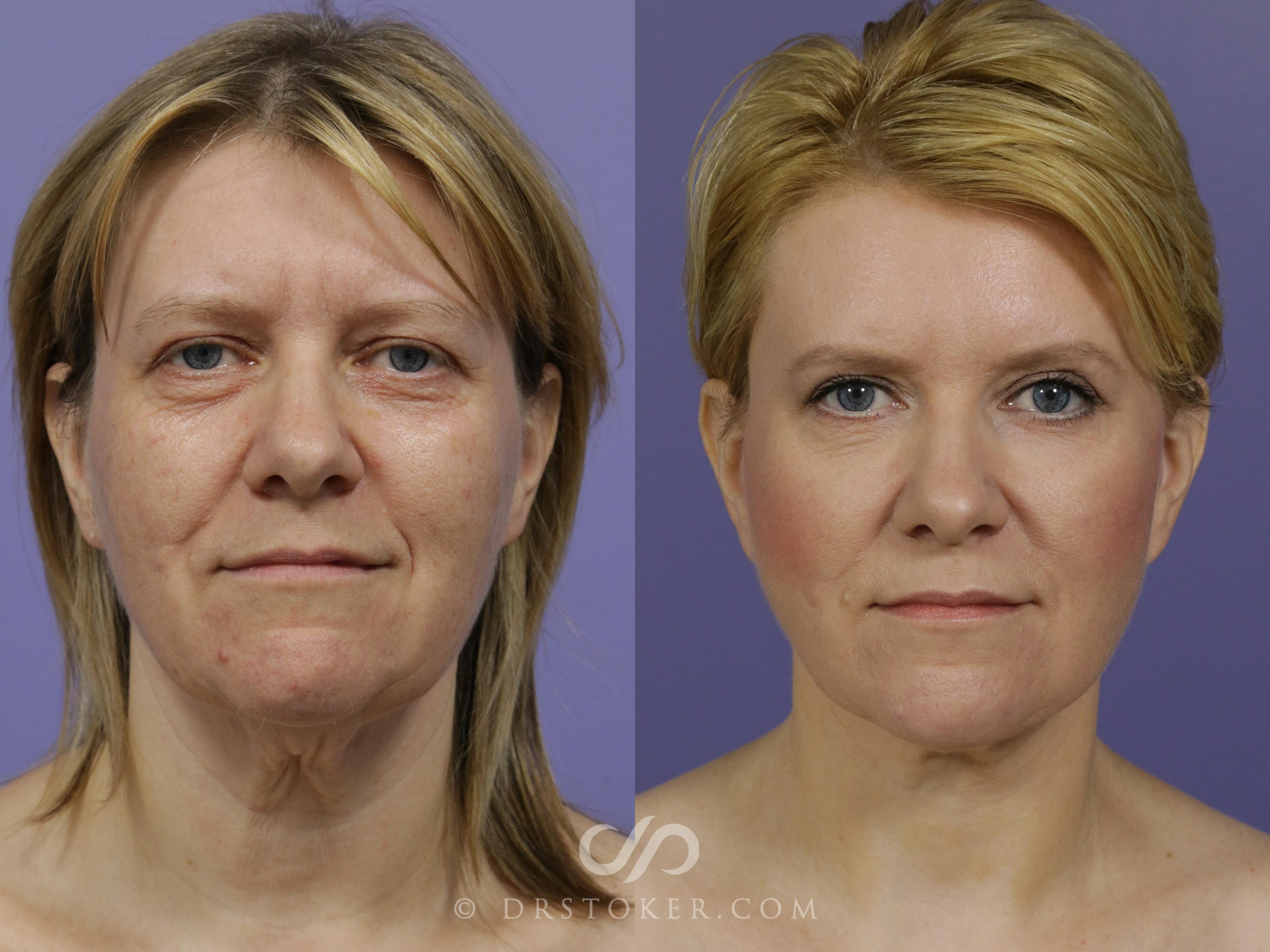 Dr. David Stoker, a board-certified plastic surgeon in Los Angeles. I'd like to share with you a stunning Traceless Facelift result. What is a Traceless Facelift? That's one of my signature procedures that is a facelift frequently overlapping with the face and neck lift that involves pan rejuvenation in such a natural appearance with such dis... Read More
Before & After
Case: 3 of 5

This beautiful 52-year-old woman came to us hoping to have a pan facial rejuvenation treatment to make her look how she felt young and beautiful. She flew in from out of town and was a previous patient of mine for other procedures. And she, most of all, wanted a natural appearance.

We did a face and neck lift with platysmaplasty, a chi... Read More
Before & After
Case: 4 of 5

This 51-year-old man was bothered by premature aging on his face. He felt that he appeared angry or grumpy even when he was happy inside. Dr. Stoker performed a facelift, upper eyelid lift and carbon dioxide laser resurfacing of his lower eyelids. He is shown before and three months following his surgery. He now feels it is easier for him to... Read More

Keep in mind that each patient is unique and your results may vary.

What Is a Deep Plane Facelift?

When performed by an experienced plastic surgeon with extensive training in this approach, a deep plane facelift can create dramatic results that last for a decade or more. Still, a SMAS (superficial musculoaponeurotic system) facelift is a very effective approach for many patients.

Dr. Stoker customizes facelift surgery based on your specific needs after a thorough exam and consultation. He also employs his signature Traceless Facelift using the deep plane technique to produce natural-looking results with discreet incisions and minimal downtime.

Who Is a Good Candidate for a Deep Plane Facelift?

Women and men with significant jowls, deep nasolabial folds, and loose neck skin can benefit from a deep plane facelift. It’s important that the patient be in good overall health. Recovery can take a bit longer than what’s typically expected after a less aggressive facelift.

A deep plane facelift corrects the following signs of aging:

In addition to improving the appearance of the mid-face and lower face, a deep plane facelift sculpts a more contoured jawline and minimizes neck bands. The deep plane approach to a neck lift can produce more definitive and longer-lasting results than a traditional neck lift.

How Much Does a Deep Plane Facelift Cost?

The cost of a deep plane facelift is typically more than what you would pay for a less aggressive facelift technique. Because Dr. Stoker customizes each facelift procedure, the cost is determined after your consultation. The surgery may include other procedures, such as laser skin resurfacing, fat transfer, or eyelid surgery, for comprehensive facial rejuvenation.

How Long Is the Recovery After a Deep Plane Facelift?

Your recovery after a deep plane facelift likely will take a little longer than other types of facelifts. You should plan to take 2 weeks off from work, although some patients may be able to return a few days earlier than that. Expect some bruising and swelling during the first week after surgery, which gradually fade. You should also avoid strenuous activity for about 6 weeks.

The results of a deep plane facelift can last a decade or more. The aging process continues, of course, but you can extend the duration of the results by using medical-grade skincare products daily and avoiding prolonged exposure to the sun.

Start With a Consultation

If you’re looking for the best facelift surgeon in Los Angeles, request a consultation using the online form to meet with Dr. Stoker. You can also call our office at (310) 300-1779 to schedule an appointment.